State of the Schools

Noblesville Schools Superintendent Dr. Beth Niedermeyer presented the annual State of the Schools address at a recent Noblesville Chamber of Commerce luncheon, covering a wide range of topics ranging from how the district is spending referendum funds to upcoming construction plans.

Niedermeyer kicked off the presentation with an update covering safety and mental health enhancements funded by the referendum, as well as highlights of the recently announced teacher contract that addresses key pay gaps with the largest teacher pay increase in almost 40 years. The new contract positions Noblesville teachers more competitively relative to other Hamilton County educators.

Regarding referendum safety spending, Niedermeyer reported that the district has implemented approximately 40 different safety measures in the last 18 months, including hiring a new full-time safety director and tripling the number of Noblesville Police Department officers in schools through a collaboration with the City of Noblesville. A video explaining the district’s new gun-sniffing safety dogs was also shared.

Several construction projects were also announced, all of which will be funded through bonds and will not use referendum dollars or raise the tax rate.

The largest project that’s been greenlighted is a future Noblesville Schools Community Center (NSCC) located off of Field Drive, to the east of Noblesville East Middle School. The NSCC is expected to house the district's new alternative education program, as well as adult education classes, community meetings, programming for 18-22-year-olds with special needs, and indoor team practice space. The approximately $6 million project is currently in the design phase and scheduled to break ground in early 2020.

Another project moving forward is an expansion to the district’s oldest and smallest school, North Elementary, which was built in 1967. The added space will provide North students with adequate room for lunch, physical education and music programming, as well as restroom renovations. The district is currently gathering bids and cost estimates.

The property near where White River Elementary stands is also expected to see enhancements, including the addition of a soccer shelter with changing rooms that can be used for weather emergencies and an expanded district maintenance storage facility. The project is currently in design and will cost approximately $2 million.

The district shared that they have recently completed a partial renovation of their educational services center to accommodate the addition of safety and mental health staff, as well as specialized support staff with the Hamilton/Boone/Madison County special education cooperative.

A few other facility projects are currently being researched and considered including possible expansions at Hazel Dell Elementary and Noble Crossing Elementary, both of which are over capacity, and a new multi-purpose stadium.

These projects are in addition to the district’s recently announced solar energy initiative that’s expected to generate hundreds of thousands of dollars in savings.

Other highlights of the State of the Schools address included:

The luncheon was themed around the district’s 150th anniversary and included an exhibit of historical items and birthday cake. As part of the anniversary, community members are encouraged to honor those who have made significant contributions to Noblesville Schools by nominating a candidate for a Noble Miller award by November 1. To make a nomination, and to participate in other anniversary events and celebrations, visit noblesvilleschools.org/150 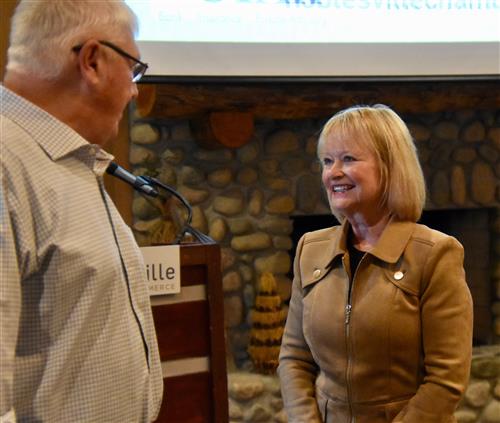